Check out all the latest news from Dr. Ahn and The Aesthetic Wellness Center.

What Exactly is Done During a Rhinoplasty? 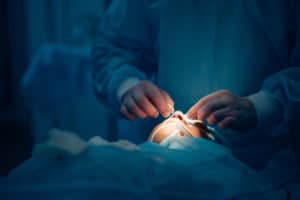 During rhinoplasty consultations, Dr. Ahn is often asked, “exactly what are you going to do to make my nose look the way I want it to look?” He answers that most experienced rhinoplasty surgeons have a “toolbox” of maneuvers. Depending on what is needed for that particular nose, he will choose from a handful of techniques to achieve the results that the patient seeks. The key is to have a wide selection of “tools” and this comes with experience, training and continued efforts to improve. During the consultation, Dr. Ahn will review these techniques in detail with the patient so that communication is as good as possible.

What can be done to a nose?

HOW TO MAKE A LARGE TIP (BULBOUS) MORE REFINED AND SMALLER

During the consultation, Dr. Ahn will measure the tip projection using computer imaging. If he determines that the tip is overprojected (too far from the face) he then may recommend deprojecting the tip, moving it closer to the face, to improve the proportions and balance. The opposite is true as well for an underprojected tip.

Moving a tip closer to the face usually involves cutting the tip cartilage and then precisely overlapping the segments so that the tip moves back the correct distance. Moving the tip away from the face, increasing projection, depends on using cartilage grafts to provide a strut of support. These grafts are often called septal extension grafts or strut grafts.

HOW TO LOWER THE BUMP ON PROFILE

The “dorsal hump” is the bump on the nose, made of bone and cartilage, that is seen on the profile view. It can be familial (your family’s nose) or the result of trauma. Bumping the nose can cause growth of bone.

To lower the bony part, a rasp (a tool that looks like a fine file) is used to gently take down the convexity. To precisely lower the cartilage, Dr. Ahn uses a micro blade to remove segments that are as thin as less than a millimeter. Dr. Ahn feels that it is critically important to lower the bump slowly, carefully and with great attention to detail, as a millimeter change can make a significant difference on the result.

HOW TO STRAIGHTEN A TWISTED NOSE

During his residency training, Dr. Ahn was fortunate to train at , where many patients had “twisted” noses as the result of trauma. Because there were so many people with crooked noses, Dr. Ahn and his fellow residents were able to study how best to treat a twisted nose with surgery. As such, Dr. Ahn has extensive experience with operating on the twisted nose.

The twisted nose is often the result of multiple episodes of trauma, or at least one significant incident that resulted in a broken nose. There are many factors that may contribute to the twisted nose including: a deviated septum, misshapen cartilage and displaced, previously broken nose bones. All of these need to be addressed during rhinoplasty to make the nose straighter. Unfortunately, it is not always possible to make the nose perfectly straight since so many forces have been holding the nose in a twisted position.

Careful and experienced rhinoplasty surgeons are sensitive to the concept of ethnicity preservation in rhinoplasty surgery. Not everyone wants a stereotypical northern European nose. In fact, most patients want to retain the characteristics of their specific ethnicities. They just want a nicer version of their current nose and a result that does not make them look like an overall different person. Dr. Ahn ensures that during the consultation there is excellent communication in terms of the patient’s goals. For example, some want to remove a familial bump and make the nose straight while others want to retain some of the bump but just want it to be smaller. Dr. Ahn takes great pride in his ethnic preservation rhinoplasties.

If you would like to learn more about rhinoplasty, please schedule a personal consultation with a double board certified facial plastic surgeon like Dr. Ahn. He can recommend an appropriate course of treatment after evaluating your aesthetic needs and goals. Contact the Aesthetic Wellness Center by calling or emailing us today.

Dr. Ahn specializes in facial aesthetic rejuvenation and understands that patients need individualized care catered to their unique goals and considerations. Using his artistic eye, surgical experience and wide-ranging skills, he guides his clients through this highly personal process; whether it be a minimally invasive treatment or a cosmetically transforming surgery.

Before & After Gallery Read Our Reviews Our Specials